re-order the limited edition for exclusive content at the same price as a standard edition.

The spiritual sequel to Demons Souls, the action RPG Dark Souls is set in a rich, dark fantasy universe. Intense action within the dungeons, encounters with terrifying enemies and innovative online features combine for a unique gaming experience. Dark Souls' world breaks down barriers with a fluid design encourages exploration and promotes an adaptation experience. At a time when the players come face to face with terrifying enemies and find new areas, the infallible system and reward challenge takes possession of everything to offer a sense of achievement without equal.

When Demon's Souls was released back in the fall of 2009, it surprised gamers for a number of reasons. Japanese developer From Software created a game that was so ruthlessly hardcore that it was surprising when the PlayStation 3 audience took so fervently to it. Equally surprising were its sales. Demon's Souls managed to sell well over 500,000 copies in the United States alone. Quite a feat for a PlayStation 3 exclusive assumed to be such a niche title that Sony didn't bother to publish the game outside of Japan.

But perhaps the biggest surprise of all was that gamers couldn't get enough of Demon's Souls' formula. For a title that personified the notion of unforgiving, there was a legion of players that wanted more.

And more they will get. I recently got a chance to see Dark Souls, and the single lasting impression was that, in many ways, it's more of the same. And that's just fine. Like Demon's Souls, Dark Souls is all about grueling gameplay and outrageous difficulty. From Software wants to make Dark Souls even harder than the previous game, and this was on full display. 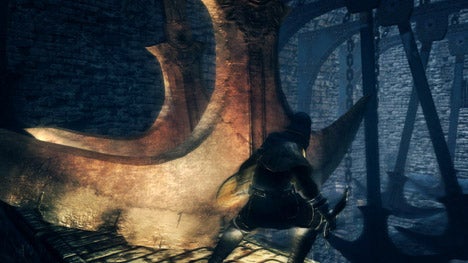 What's screwed up is that there are probably five enemies behind you.

Demon's Souls conventions were in full effect in Dark Souls as I witnessed a heavily-armored knight fight his way through a castle-like location known as Sen's Fortress. Fending off a variety of lizard creatures with snake-like heads was the least of our poor knight's concerns. Many of these conflicts took place on thin corridors suspended over gigantic chasms. One wrong move, whether made by the knight or forced upon the knight by an enemy, would mean failure. And all the while, hanging blades swing like pendulums over the pathway, forcing you to time your movements. If you did happen to fall and survive (which happened during the demo, as the PR representative was using a ridiculously buffed-out character to avoid an untimely death), you'll be greeted by even more powerful enemies below. You know – typical Demon's Souls stuff.

Even treasure chests can be dangerous. While sometimes full of precious materials, one treasure chest in particular turned on our knight, surrendering loot once it was destroyed. Like Demon's Souls, Dark Souls is about risk-reward. But it's also about a measured approach and patience. If you lack either, Dark Souls might frustrate you just as much as Demon's Souls did, if not more-so.

Indeed, Dark Souls is so over-the-top with its difficulty that it forced a smirk on my face every so often. Upon entering Sen's Fortress, arrows shot from hidden slots in the walls fly at you, the first enemies descend on your location, and those aforementioned blades swing in the background. There's little room for error, and no time to breathe. And like Demon's Souls, Dark Souls doesn't allow you to pause, forcing you to navigate menus only when it's safe, which isn't very often. 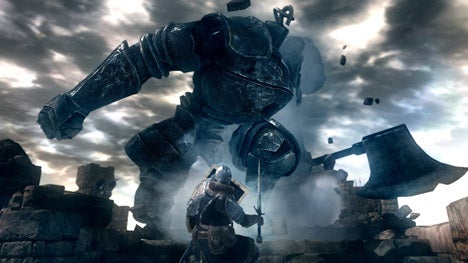 Thankfully, there is an addition that will make Dark Souls slightly more palatable for those of you who thought Demon's Souls was too extreme. From Software has introduced bonfires that appear randomly throughout dungeons and other locales. These bonfires allow you to take a breather and recover in safety, though the only way to save your precious souls is to escape from these areas with your life. Bonfires won't solve that problem. And since everything in Dark Souls is more interconnected than the segmented approach of Demon's Souls, you'll be more likely to press forward, only to meet an untimely demise.

All of this should make Demon's Souls fans very happy. Even though there isn't a narrative connection between the two games (and even though the story itself in Dark Souls was described to me as "light"), this is essentially Demon's Souls 2. Only this time, Xbox 360 gamers can get in on the fun too.

Dark Souls is on pace to be released in October of 2011.

Dark Souls' producer has admitted the ongoing PlayStation Network downtime has caused "problems" for the development of the online-enthused action RPG.

"I would be lying if I said the problems with PSN hadn't caused us some problems," he said, "but we are in contact with Sony and are aiming to meet a street date of October 11."

Yesterday Sony said the PS3 online service will be offline for at least a few more days.

yup lookin forward to it pesonally

Plus the few hours you spent noobhunting the other night

LOL - a timeline for a journalist playing Dark Souls at E3:


12:30 PM: Selected the pre-made "Pyromancer" character because of tattered cloak and ability to control fire.

12:33 PM: Killed by skeleton hiding on stairwell. Respawned to start.

12:43 PM: Killed by armored boar and skeleton security detail waiting in next room. Respawned to start.

You know what I thought? "Noob" is all


It's time to step up and show the world the what you've got when it comes to heraldic flair, as NAMCO BANDAI Games Europe announce the Dark Souls shield design contest, open to everyone from June 27rd to July 28th 2011 on the game's official Facebook page at www.facebook.com/darksouls.

Taking part couldn't be easier. Give it your medieval best to create up to three original shield designs using any of the three blank templates provided. Next, submit your heraldic works of art, then sit back and watch the votes stack up as fans in every corner of the globe admire your handiwork and choose their favourites. The final winners will be hand-picked by the Dark Souls development team at FromSoftware in Japan.

The three winning designs, one for each shield template, will be made available as Dark Souls post-launch content, meaning three lucky winners will be able to stride into battle with their friends online proudly bearing the shield they designed, while every player will be able to carry the shields designed by their compatriots into battle.

Become a fan on the official Dark Souls Facebook page at www.facebook.com/darksouls
Download the blank shield templates
Create up to three original masterpieces of heraldic design
Submit your finished designs via Facebook on or before July 13th 2011


Fans will be able to vote for their favourites on Facebook throughout the competition, with voting open until July 20th to allow last minute entries time to gather votes.

The top ten designs for each of the three shield templates as voted for by you will then go to FromSoftware for the final decision, with the winning designs being announced via Facebook on 28th July 2011.

Each of the ten winners will receive a copy of Dark Souls signed by game director Hidetaka Miyazaki. The final 3 winners will see their designs brought to life for all time in the Dark Souls universe, and will receive a signed copy of the limited edition game plus their names in the game credits, ensuring immortality no matter how many times they die while playing.

Sign up today for this unique opportunity to carve your name indelibly in Dark Souls lore and earn the envy and respect of legions of fans around the world. To read the full rules and enter the competition, go to www.facebook.com/darksouls. 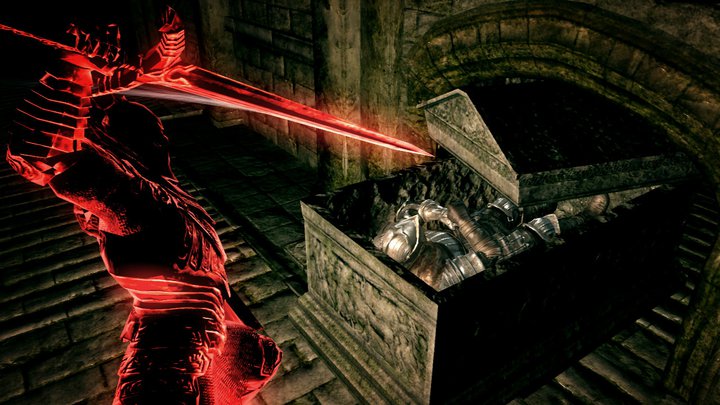 What it doesn't show you is that the host had Total Protection on and it ran out just before the screenshot was taken. The black phantom just went to the glowing blue coffin lol.

lol they dont hit as hard though it seems lool.

I hope they dont give you that Potion thing that redoes your health in the full game....
To me it seemed unlimited.... i think it would take most of the tactics of the game away,

Run in there guns and blazing, Kill and run out, Rehealth and go again,
Unless it was just me who could not see a Number next to the potion things to say how many he had left!!!

Herbs where the killer in Demon Souls, and thats what made it hard!!! farming Herbs or buying them!!

farming herbs, you little smoker you.